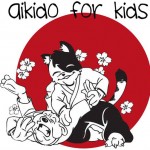 At Aikido Bushido Center we organise children’s classes in order for your child to be able to learn the art of aikido. Aikido is a modern martial art based on Japanese tradition and everybody can be a part of it regardless of age and sex.
Pracicing aikido does not only helps the child to grow healthy and properly through sport games but also to develop his mind. The children learns both through the games and the techniques of aikido values such as collaboration, discipline, how not to be competitive, while increasing their self-esteem.
In addition to the above, aikido does not only improve the children’s character but also enhance his learning ability. Japanese studies haw shown that students that practises aikido have improved their school performance by 30-35%.
The training is conducted in a pleasant enviroment mostly in the form of games for the younger ages and gradually replacing the games with techniques for the older ages. Training in the art of Aikido is absolutely safe. Aikido as a martial art does not involve a system of competionions. The children learn to fight without competitiveness but they develop the feeling of mutual help and self-control. They learn to solve their differences in a peaceful way. By providing different kind of motivations and the proper guidance, the children can develop their skills and abilities in a helathy and safe enviroment.
This website uses cookies to improve your experience. We'll assume you're ok with this, but you can opt-out if you wish. Cookie settingsACCEPT
Privacy & Cookies Policy