Aikikai is the original school of Aikido. It has as a center the Aikikai Foundation in Japan, and its great representative the Doshu (the family heir of the founder of Aikido). It is represented internationally through the International Aikido Federation.

Aikikai is not one style of aikido but instead it includes a variety of techniques. This is due to the vast knowledge of first generation instructors, who each had their own interpretation of the art, and also they had different influences. Nonetheless, Aikikai is often described as a style to be compared with other aikido organizations. Aikikai is described as the most traditional. It remains loyal to the Ueshiba house and sometimes it is called Ueshiba Aikido. Aikikai has maintained many of the aspects Morihei Ueshiba valued, such as the non-competitive training system (on the contrary with Tomiki’s development). Moreover, spiritual interpretations are not emphasized compared to in Ki Society.

Morihei Ueshiba’s own style evolved throughout his life. The pre-war aikido techniques taught by Ueshiba were generally closer to aikijujutsu whilst flowing technique was more constant as he became older. In that way, these changes are shown in the aikido of people who studied close to him at different periods of time.

In Japan, there are about 1800 other training locations affiliated with the Hombu, united under the All-Japan Aikido Federation.

Overseas, there are about 100 aikido organizations recognized by the Hombu. These are national aikido organizations that each represent many dojos and many students. The ranks of students in these organizations are recognized specifically by the Hombu. (The Hombu has specific procedures for examinations of aikido grades and instructor titles. This ensures a degree of international connectivity and serves to prevent local instructors from exaggerating their ranks.) However, regardless of recognition, all aikido schools remain independent regarding their organization, from the Aikikai Foundation. 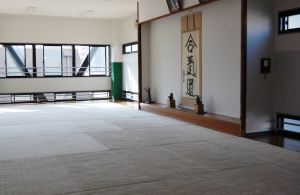 Hombu dojo has about 30 instructors, and most of them are shihan. The instructors include the Doshu and Hiroshi Tada 9th dan.

Hombu dojo is situated in Wakamatsu-cho, Shinjuku, in Tokyo, Japan. (This same location was the Ushigome District of Shinjuku in the past.)

The dojo was established in April 1931 by the founder of Aikido and was originally named Kobukan Dōjō (皇武館道場, imperial warrior hall dojo) but was named “Hombu Dōjō” after World War II.

In 1967 the original wooden building was replaced by a more modern building. Training takes place in three rooms about 250 tatami in total. The main training area has 105 tatami mats (170m2). The other two training areas, containing 72 and 42 tatami mats respectively, are often used for beginner’s classes, children’s classes, women’s classes, or for short-term registrations and “academy” (Gakko) courses.

Classes are seven days a week. Beginner’s and regular classes are open to all Aikido practitioners or for future members of Aikikai.

Also, a small number of students stay in the dōjō as part of a live-in training program.