Morihei Ueshiba (植芝 盛平 Ueshiba Morihei – December 14 1883 – April 26 1969) was master of different martial arts and the founder of the art of Aikido. Usually, he is referred to as “the founder Kaiso (開祖?) or Ōsensei, the great teacher.

Son of a landowner from Tanabe, Ueshiba studied a number of martial arts and served at the japanese army during the Russo-japanese war. Following his discharge from the army, he moved to Hokkaido where he met with Takeda Sokaku, founder of Daitō-ryū aiki-jūjutsu. In 1919, he left Hokkaido and became a member of Ōmoto-kyō, a sinto movement in Ayabe where he worked as a martial art instructor and opened his first dojo. In 1924, he accompanied the leader of this movement, Onisaburo Deguchi to a mission in Mongolia in which the were seized and imprisoned by Chinese and returned to Japan. The following year, he experienced a great spiritual enlightenment, stating that, “a golden spirit sprang up from the ground, veiled my body, and changed my body into a golden one.” After this experience, his martial arts skill appeared to be greatly increased.

Ueshiba moved to Tokyo where he founded the Aikikai Hombu dojo. With the end of World War II and its consequences, the dojo was shut down. However, Ueshiba continued teaching in another dojo he had set up in Iwama. From the end of the war until the 1960s, he worked to promote aikido throughout Japan and abroad. He died from liver cancer in 1969. 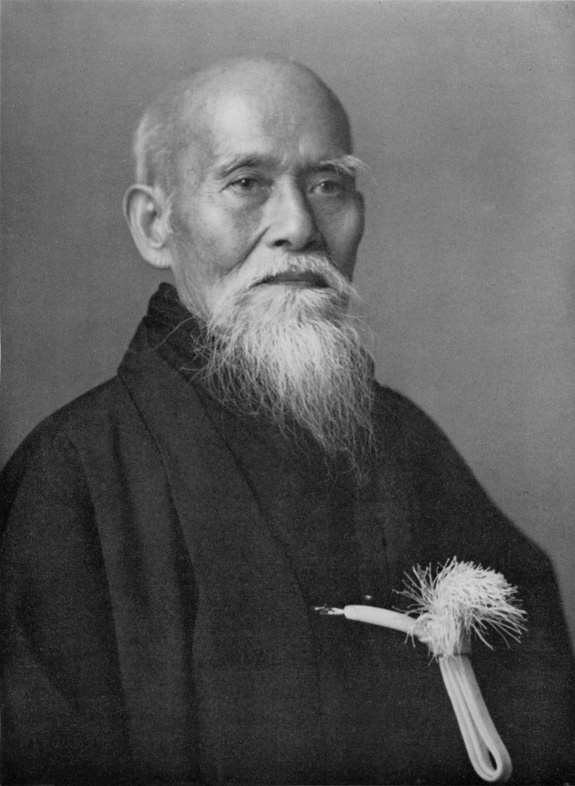