How the training is conducted in Aikido?

The training of Aikido starts from the moment you step in the dojo. The students must learn to observe the right etiquette every single moment. When someone is entering or exiting the dojo, just as with the tatami, he must always take a bow. 3-5 minutes before the start of the class, all the students must line up while sitting in seiza position (on their knees). If someone can’t sit in seiza, after the approval of the teacher, he can sit cross-legged.

“The only way to improve in Aikido is through constant and continuing training. The attendance is not obligatory but keep in mind that in order to get improvement, you have to train at least 2 times a week. In addition as Aikido cultivates the feeling if self-discipline, the first thing in order to obtain it, is by attending diligently the classes.

Your training is your own responsibility. The teacher or anyone else will not take you by the hand and lead you in order to improve in aikido. The teacher or the senior students are not responsible for you learning something new in aikido. Part of training in aikido is learning to be observant. Before asking for help, you will have to understand the technique on your own by observing the others.

Aikido is consisted of more than mere techniques. Aikido teaches observance, change in the way of physical and mental thinking and behavior. In particular, you have to pay notice to the way you react on certain circumstances. In that way, part of the training in Aikido is the cultivation of self-awareness.

Another vital part of the training is its character itself. Aikido training is cooperative and not competitive. The techniques are practiced with a partner not an opponent. You must always take great care about the speed and the strength in which you practice, in order to match that of your partner. Your partner is lending his body in order for you to practice upon. It is only logical to be careful with that that is lent to you.

Sometimes training in Aikido can be frustrating. Dealing with that frustration is also part of the training. Practitioners must observe themselves in order to determine the source of this frustration and dissatisfaction with their progress. Sometimes this dissatisfaction comes from the comparison with the other practitioners, something that leads to a kind of competition. It is a great thing to admire the talents of others but not in a way of comparison that causes envy or excessive self-criticism.

If at any moment during the training you feel tired, you can’t continue or you injured yourself preventing you from practicing some moves or techniques, you are allowed to temporary remove yourself form the practice until you are ready to continue once again.

How do ranks and promotions work in Aikido? Why aren’t there any no colored belts?

According to the International Association of Aikido and the United State Federation, there are six ranks before the black belt. There are called kyu.

Whether a practitioner is fit for testing usually depends, but not entirely, at the total hours of attendance. Other relevant factors is the respect of the student towards the others, the regularity of attendance, and in some schools, the contribution to maintaining the dojo or promoting the art of Aikido.

The requirements of the tests vary from school to school and from style to style. They also change from time to time.

According to tradition, white belts are worn by all mudansha aikidoka (those of kyu rank or under the black belt rank) and yudnasha aikidoka wear black belt (those of dan rank). While some dojo insist on this policy, others have adopted systems with different coloured belts for the mudansha with every color to symbolize one or two kyu. Of course there are supporters of both systems.

What is a hakama and who can wear it?

Aikidoka wear a kind of wide trousers that resemble a skirt. The hakama was originally worn by the samurais and the gi originally was used as underclothes. Today both hakama and gi are considered tradition for most of the schools of Aikido.

What if I can’t throw my partner?

This is a frequently asked question in Aikido. There is more than one answer to that. First of all, you have to ask your instructor.

Secondly, the techniques of Aikido that are shown in the dojo are all idealizations. No aikido techniques work on every occasion. The techniques must be adapted to the specific conditions of the attack. However, because it is difficult to cover every possible variation of a technique, we adopt a general approach of the attack and learn to react to it. In higher levels, we can try to learn generalized strategies and how they can be applied to more specific circumstances.

Thirdly, Aikido techniques usually take a lot of time in order to be executed correctly. You can ask your partner to apply less form until you can execute better the technique.

Finally, a lot of techniques can’t be performed correctly without the application of an atemi (a strike that is delivered to the attacker in order to facilitate the execution of the technique). For safety reasons, we avoid the atemi during the training. Just ask the cooperation of your partner.

How often should I practice?

How often you wish to do so. However, it would be advised a minimum of two times a week.

How can I practice aikido by myself?

Naturally, the best way to learn aikido is with a partner. However, there are several ways to practice aikido by oneself. Firstly, one can practice alone in kata with a jo or a bokken.

Secondly, one can perform the techniques with a “shadow” partner. Even a mental execution of the techniques can serve as an effective way of training with one person.

Why should I to train in weapons?

Some schools hold classes exclusively for training with jo (staff), tando (knife) and bokken (sword), the three basic weapons that are used in Aikido. However, as the main goal of aikido is not the use of weapons, practitioners are advised to attend the classes with weapons at least two times a week.

There are different reasons that explain the training with weapons in Aikido. Firstly, a lot of aikido moves comes from classical martial arts. For example, all the aikido attacks are derived from sword strikes. For that reason, hand attacks appear slow and ineffective, without intensity, especially for someone trained in arts like karate and kick-boxing.

Secondly, weapons training helps the trainee in learning the proper ma’ai, distancing. The constant moving in and out of the weapon’s line of attack enhances the instinctive perception of time and space, two terms really important for training without weapons.

Thirdly, many advanced Aikido techniques involve defences against weapons. In order to ensure that such techniques can be practiced safely, it is important for students to know how to attack properly with weapons, and to defend against such attacks.

Fourthly, there are often important principles of Aikido movement and technique that may be more easily demonstrated by the use of weapons than without.

Fifthly, training in weapons kata is a way of facilitating understanding of general principles of Aikido movement.

Sixthly, weapons training can add an element of intensity to Aikido practice, especially in practicing defences against weapons attacks.

Seventhly, training with weapons provides Aikidoka with an opportunity to develop a kind of responsiveness and sensitivity to the movements and actions of others within a format that is usually highly structured. In addition, it is often easier to discard competitive mindsets when engaged in weapons training, making it easier to focus on cognitive development.

Can a beginner start training in weapons?

A student can start training in weapons even from the first day. However, a trainee must always ask his instructor first. For some teachers the right moment is the first day of practice. For others, the proper time may be at a later time.

Training the mind in Aikido. 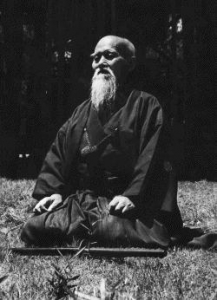 The founder of the art, Morihei Ueshiba, wished for Aikido to be something more than a system of self-defense. He intended to mix his knowledge in martial arts with a group of ethical and social ideals. Ueshiba believed that through aikido training, people would perfect themselves physically and spiritually. It is not however obvious from the start how training in aikido can result in a spiritual-physical transformation. Moreover, many other martial arts are said to contribute in enlightenment or psycho-physical transformation. It is logical to question ourselves how aikido might differ from other martial arts regarding the transformative effect.

At this point, it should be clear that any transformative ability of Aikido, if it is exist at all,  does not come from the exclusively from physical techniques. If Aikido is mean for self-improvement and psycho-physical transformation as envisioned by the founder, the practitioner of Aikido must adopt certain attitudes toward Aikido training and must strive to cultivate certain sorts of cognitive dispositions.

Usually those arts that claim to provide a transformative framework for their practitioners are based in religious and philosophical traditions such as Buddhism and Taoism (the influence of Shinto on Japanese arts is usually comparatively small). In Japan, Zen Buddhism exercised the strongest influence on the development of transformative arts. Although Ueshiba was influenced by the new religion Omotokyo and far less by Taoism and Buddhism, it is certainly possible to assimilate aspects of Zen and Taoist philosophy and practice into Aikido. Moreover, Omotokyo is largely based on a complex structure of neo- Shinto mystical concepts and beliefs. It would be wildly implausible to suppose that adoption of this structure is a necessary condition for psycho-physical transformation through Aikido.

So far, regarding the incorporation of Buddhism and Taoism traditions and philosophies into aikido, psycho-physical transformation through the practice of Aikido will be little different from psycho-physical transformation through the practice of arts such as karate, kyudo, and tea ceremony. . All these arts have in common the goal of instilling in their practitioners cognitive equanimity, spontaneity of action/response, and receptivity to the character of things just as they are (shinnyo). The first steps in order to apply this kind of dispositions in trainees is a two-fold focus on repetition of the fundamental movements and positions of the art, and on preserving mindfulness in practice.

Due to the cooperative aspect of the training, aikido provides another chance for personal transformation. Cooperative training facilitate the discard of competitive behaviour which enhances other personal dilemmas.

Cooperative training can also instill the regard for your partner’s safety. The concern for others can lead to other forms of attitudes and thinking in other situations than in the practice of Aikido. In other words, the cooperative framework of Aikido practice is supposed to translate directly into a framework for ethical behaviour to one’s daily life.