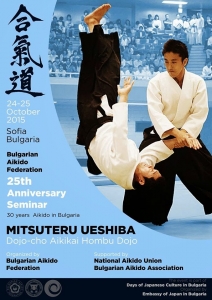 The seminar will take place in the Arena Armeec Hall during 24-25 October 2015 in Sofia, Bulgaria.

In addition the seminar will be a part of the “26 DAYS OF JAPANESE CULTURE IN BULGARIA”. An event organized by the Japanese Embassy in bulgaria.

This site uses Akismet to reduce spam. Learn how your comment data is processed.